In my previous post: Photography 101 – Aperture, Shutter Speed & ISO we explored the basic camera controls, their relationship to each other and their use in both everyday photography and creative photography.

Today I want to look in greater depth at how this relates to the captured image in terms of Exposure and the Histogram.

In simple terms exposure is the amount of light that is allowed to fall on the sensor (or film) when you take a photograph and modern cameras will have a built in exposure meter (or light meter) that will determine the light values of a scene and attempt to return a result that will give a suitable mid tone which equates to 18% grey.

Why 18% grey? Simply, this is the correct value for caucasion skin tones under normal lighting conditions and is considered the standard that meters are set to.

So with our camera set to auto the meter will evaluate the scene and attempt to set the aperture and shutter speed to give an average exposure of 18% grey, which generally will give a reasonable image. The problem with this approach is that we do not always want to photograph average subjects; we may wish to photograph non-Caucasian skin tones, snow and beach scenes, night scenes, high key and low key scenes.

In these situation the light meter will attempt to reproduce the scene to 18% grey which will result in under exposed snow / sand or blacks will look grey or muddy, in these cases we need to make a judgement of what is the most important part of the image to expose for and trick the meter into making the correct settings.

Exposure meters fall broadly into two categories; built in (part of the camera) or hand held and can feature several different modes.

In this system 60-80% of the exposure is biased towards the central portion of the viewfinder and gives less importance to the exposure towards the edges. This will generally return acceptable results with portraits and general scenes as it will be less influenced by brighter skies etc.

The exposure is calculated by averaging out the entire scene.

In this mode metering is based on 1-5% of the viewfinder, typically the very center, variations will enable the photographer to select from different areas of the viewfinder or may offer multi-spot metering, where a series of targets can be selected.

Spot metering is ideal for subjects with high contrast such as back-lit subjects, photographs of the moon or actors / musicians against a dark or light background.

Also known as ESP, Matrix, evaluative or honeycomb metering. Here, multiple zones are metered and used to determine exposure across the scene, different bias will be given to different areas and this will in some cases be linked to the camera auto-focus to bias the point of focus.

So far we have discussed various metering systems and how they attempt to make the correct exposure, some of their drawbacks and basics of operation, all of which leaves two questions; how do we know if the exposure is right? If it’s wrong how do we correct it?

Values to the left of the screen represent blacks and dark tones, to the right light to white tones and the graph will normally show a peak where the exposure is concentrated. If this peak is towards the left, the image will be dark and shadow detail may be lost, if fully to the right the image will be very bright and highlights may burn out. In the majority of situations we would want to expose so that the peak is just to the right of center as shadows can be recovered easier than highlights in post production.

If we need to adjust the exposure when using any of the camera auto modes e.g. program, auto, aperture or shutter priority, then we need to trick the meter by using the exposure compensation control to manually increase or decrease the exposure, use exposure bracketing to take a series of exposures (normally at 0, +1Ev, -1Ev) or use Exposure Lock (AEL) to meter an important part of the scene which is off center before re composing.

Correct use of the Histogram allows us to better understand where the light distribution is within the image and will lead to better captures, with experience and use of the histogram function you will learn to understand how light interacts with the elements of the image and how to better set the camera controls before taking a shot.

Shadows are all around, the harsher the light the more well defined the shadows will be harsh light tends to produce far more compelling photos. Just look around they are everywhere.

Look for shadows that interplay with each other or something that creates a striking contrast. Shadows are ideal subjects for black and white processing, but can create truly compelling pictures even in color.

The tricky part to photograph shadows is to determine the exposure. Using any auto exposure mode will often lead to an overexposed image, this because the cameras light-meter will try to compensate for the dark areas and brighten up the picture and bring out details in the shadows. This is not necessarily desirable, but could not it just be fix in post processing? Sure, but why not expose it correctly in the camera from the start, and reduce the time in the digital dark room. To control the correct exposure, in shadow photography it is best to stick with manual exposure mode or otherwise utilize negative EV exposure, for best result, the histogram should be pushed far to the left.

Personally, I prefer to use negative EV exposure. I believe it is quicker and easier for me to change EV exposure, then switch between different camera modes. This allows me to be ready for the next photo whatever it might be. 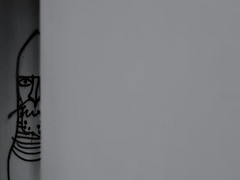 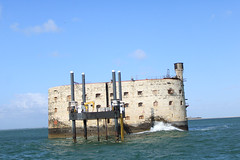 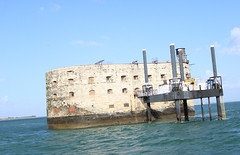